Sometimes ideas just hit you in the head and knock you over.  This is exactly what happened to me this week when I taught a class in Quantum Healing at the Academy of Intuitive Medicine.

In this class, we discussed the differences between the third, fourth and fifth dimensionality.  While I was teaching I had the realization that Somatic Awakening® powerfully helps open a doorway to the evolution into higher dimensionality.

What is the Difference 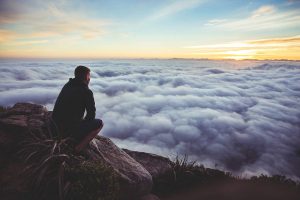 Between the 3rd, 4th and 5th Dimension

To fully understand this let’s first briefly  discuss the primary differences between the third, fourth and fifth dimensions.

In the third dimension, our ego’s are running the show, pulling us into what we “want” and getting us activated when we don’t get what we want.  In essence, our core subconscious voices are running the show and mostly causing chaos and the painful emotions that ensue from it.

In fourth-dimensionality, there is a strong sense of “presence”, of being in this moment. Because of this presence, our higher self can show up to our ego and step in so that it is not running the show as much. With both of these things present, we step into the beauty of fourth dimensionality. In essence the fourth dimension helps us start seeing the underpinnings of reality!

Although, there is a lot of talk about being in 5th-dimensional consciousness most people are just not there yet. Until we stabilize 4th dimensionality, 5-D reality only happens in short bursts as awakening experiences.

How Does Somatic Awakening Shift You Into Higher Dimensional Consciousness?

How exactly does Somatic Awakening® help you evolve into higher dimensionality?  In essence, the presence of being in this moment and the connection it opens to your higher self-allows you to be able to turn toward your ego stories.  As you do this with the presence of your higher self these parts of you are deeply held and given exactly what they need.  This brings immense healing to them and they are no longer pulling you down into the density of 3rd-dimensional consciousness.  Doing this allows you to more fully step into, stabilize, and then live from fourth-dimensional consciousness.

The three significant tools that help you step into fourth-dimensional consciousness are:  1)  being in the moment   2) connecting to your higher self and 3) turning toward the part of your ego that most needs healing.  Utilizing these three significant tools are the foundation and essence of Somatic Awakening®. This modality is ground-breaking because it utilizes exactly what is needed to help you step out of the density that has been weighing you down and more into who you truly are.

So, if you haven’t checked Somatic Awakening® out yet, I just put two new free meditations on Soundcloud. I highly encourage you to check them out to help you more solidly step into fourth dimensionality…and the beautiful gifts that this higher dimensionality has to offer.